​Based on user feedback, we developed the concept of the app ‘Get there’ paired with two smart vibrating wristbands. People with Directional Dyslexia typically have difficulty interpreting directions and orienting themselves. This app allows them to get navigation instruction in three different modes : hear, see and feel. They can activate any one of these three modes at any time.

Hear: The audio instructions are descriptive and based on landmarks. For example, “walk towards Hilton Place”
See: The visual instructs are based on augmented reality where the arrows show up in relation to the street image.
Feel: This mode activates the vibrating wristbands. Instruction on which way to turn are indicated via a sequence of vibrations on the corresponding wristband in relation to the user’s current location.
​

As a team, we decided to do the testing and prototyping in sprints of 2.5 days each. ​ 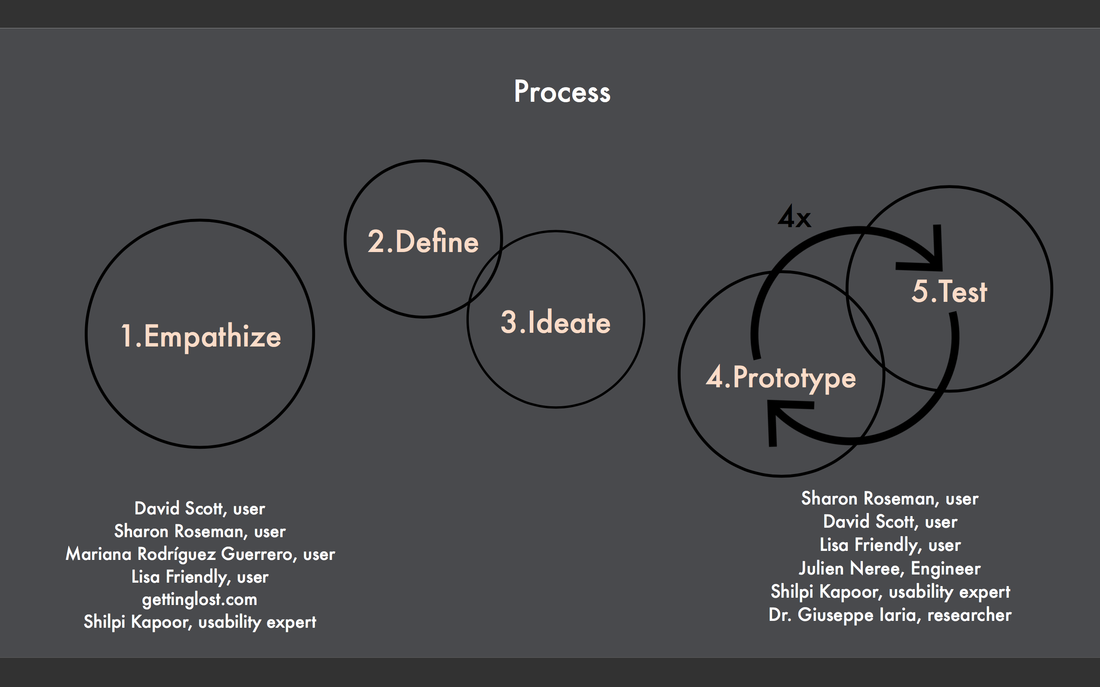 1. Empathize
It was hard to find users from existing networks because this is an invisible illness often with some stigma attached to it. After lots of googling, we found a NY times story about a woman who had difficulty navigating. This article pointed us to the private forum where others with similar conditions discussed their day to day difficulties. We learned that the term ‘Developmental Topographical Disorder’ was coined in 2009 to identify this condition. There we also found out other names that we could use to identify facebook groups where more users gathered together.
2. Define
Through research, we understood that a clinical diagnosis for this condition 'Developmental Topographical Disorientation' (DTD) was coined in 2009.  Armed with a deeper understanding of the user, we framed our problem statement.
"How can we enable people with DTD to navigate confidently and efficiently when the environment suddenly becomes unfamiliar to them?"​
3. Ideate
According to individuals with DTD, existing navigational tools like google maps and apple maps had major handicaps in its ability to meet their needs. We used ideation techniques - random word association and lotus blossom - to generate ideas for solutions.
4. Prototype

Round 1: A vibrating device that translates maps through a haptic feedback on when and what direction to turn.
Round 2: Different modes of navigational instructions to suit your environment.
Round 3: A combination of the first two solutions. The number of modes were reduced to three.
Round 4: Refined the interface and features further based on user inputs.
5. Test
We made low-fi videos of our prototypes and shared it with users and experts to gather their feedback. We sent out interview requests in the first week and scheduled them to inform different rounds of testing. After gathering final round of feedbacks, we consolidated our findings into the concept presented in the final pitch.

"This is a life changer"  - Sharon Roseman